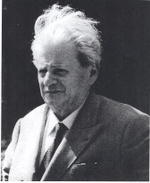 This text served as the introduction to my Master thesis on Emmanuel Lévinas and Jacques Derrida, written in 2008.

All thinkers appear to have in common a feeling of inner necessity to articulate those thoughts which they actually articulate. That will which obligates them to give a free interpretation to the intellectual profession, is shown in style, a fervour to publish and the structure of thought. This inner necessity follows as a reaction on a judgment about reality. This judgment is either motivated by attraction or repulsion. In the case of attraction, the thinker will describe reality, or comes to an either systematic of theoretical articulation. The thinker creates an image of what she sees. The attraction of that which is observed, is transformed into the choice to create an image of precisely that and not of something else. In the case the judgment of the thinker is motivated by repulsion, she will revert to the description of a possible reality, which has to wipe out the repulsion felt from the reality as it was experienced. Then, the thinker creates an image of what she would like to see and of how it could be.

Both these styles of thought could be criticized. This critique would in both cases be directed to the created image. We provide critique to make clear in what respect the image is not accurate. An important trait of critique is that it acts by definition against a mental condition of the original thinker, who – as we have said – is governed by attraction or repulsion, lust or nausea, mania or depression. The critic provides a complementary judgment: she urges the idealist to accept reality more as it is, but also warns the aesthete that not all that glitters is gold. With their inner necessity as their motivation, all thinkers are first of all representatives of themselves. Against the background of the emphasis of contemporary continental thinkers on questions of alterity, we are left challenged. What moment did the Philosopher decide that the Other became necessary to articulate? Was it a feeling attraction or repulsion that prompted this? Or is also the philosophy of alterity ultimately in a sense motivated by a hidden narcissism, a concealed attempt to articulate herself?